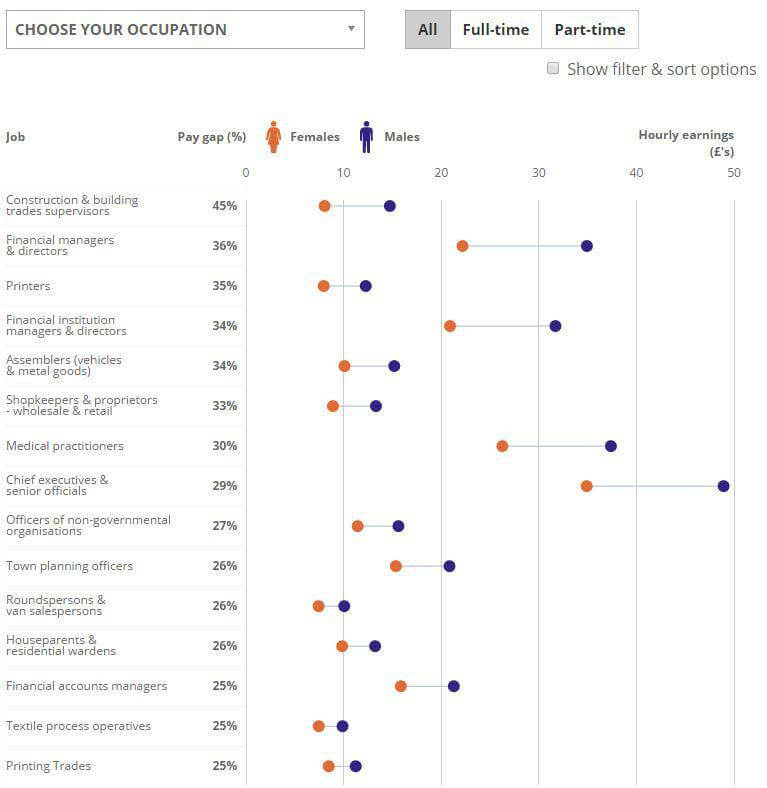 A tool, based on government data, allows employees to see find out the gender pay gap for their job.

It comes as the BBC revealed that two-thirds of its top-earners are men.

With Chris Evans revealed as its highest-paid star earning £2.2million a year – four times as much as the highest paid woman, Claudia Winkleman.

The Office for National Statistics tool, which was first released in December last year, reveals the difference in pay for a host of sectors and roles.

Out of all the pay sectors, female construction and building trade supervisors have the rawest deal, as they earn around 45 per cent less than men.

Finance directors and managers are also dogged by a major gender pay divide problem, with women typically earning over 36.5 per cent less than men.

Breaking this down into average annual pay packet figures, this means a female finance director can expect to earn around £40,000 a year, while a male director doing could be on over £70,000.

At the other end of the scale, the gender pay divide for hospital porters, care workers, debt collectors, chefs and sewing machinists is far less, hovering around the one or two per cent mark.

For cleaners, nurses and bar staff, the gender pay gap doesn’t appear to exist at all, if the ONS’ tool is taken at face value.

It’s important to note that the ONS’ pay gap figures on its interactive tool don’t reveal differences in rates of pay for comparable jobs.

This means that even if there is a gender pay gap for your occupation, it doesn’t necessarily mean men are getting more money than women for doing exactly the same work.

But it does shine a light on the disparity between incomes for those of the opposite sex.

New government rules mean that big companies – those with over 250 employees – have to publish their gender pay and gender bonus pay gaps.