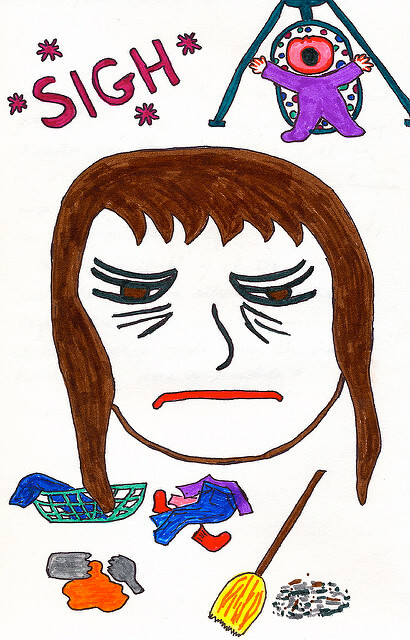 Since the landmark Women’s March on Washington (and other major cities), there has been endless discussion of whether the protests will have lasting influence, or simply be one moment in history that fades away. There has also been ongoing debate about what would constitute meaningful advancement for women in the era of President Donald Drumpf. Which issues are the real priorities? Pay equity? Or paid maternity leave? Or affordable child care or reproductive policy?

Well here’s a radical idea: What if we devote more of our focus to ensuring our husbands, boyfriends, and significant others become better partners than the president appears to have been to his wives so far? Because research shows that the only real shot we have at achieving true gender equality in the workplace and public sphere in America is ensuring that we achieve gender equality at home.

This message is driven home in the new book Drop the Ball by Tiffany Dufu, one of the few black women to establish herself in the still overwhelmingly white world of feminist leadership. (To be clear, plenty of women of color identify as feminists, including me. But those reaching the pinnacle of power at major women’s groups have remained predominantly white.) Drop the Ball will likely be dubbed by many as the heir apparent to Lean In, in part because Sheryl Sandberg is already one of the book’s most enthusiastic champions.

But there are key differences between Dufu and Sandberg that are likely to make Drop the Ball resonate with a more diverse circle of women. In addition to being a racial minority, Dufu is not from a privileged background. Despite her lofty professional achievements to date she makes it clear that her family’s financial realities mean that throughout her life and career she has been the one scrubbing her bathroom floors most weeks and cooking her family’s meals most nights.

But the primary reason Drop the Ball is likely to become a rallying cry is because Dufu finally empowers women to confront something I believe has been a missing piece of the feminist movement puzzle. Dufu uses data and her own story to affirm that until women—and of necessity her argument applies only to straight women in relationships—demand more from their partners at home, professional and societal equality will never be within reach.

The reason this message is profound is that historically, feminist leaders have focused on how society needs to change, how workplaces need to change. In other words, how every other man needs to change to help us—except the ones who have the biggest incentive to do so. While Dufu does believe policy and institutional changes are necessary, her underlying message can be summarized as this: if every single American employer gave every single female employee paid maternity leave, affordable childcare and flexible hours, we still wouldn’t achieve gender equality in the workplace if men at home continue to do what they are doing now, which is not enough.

Her message is not only refreshing, but long overdue.

Covering gender equality over the years, I noticed a pretty common pattern. Plenty of women would channel anger with their workplaces over a lack of childcare flexibility into venting that resulted in advocacy in the political sphere (or at their companies), but fewer were willing to channel that same anger into getting their partners to help them more so they didn’t feel so much anger in the first place. Particularly among progressives it seemed that demanding fairness from a person you have a transactional relationship with somehow was seen as more reasonable and realistic than demanding it from the person who’s made a lifetime commitment to you.

Though this was an observation even my own mother had made, I still wondered if as someone who is child-free I was simply misreading the equation, until I read Dufu’s book and the message seemed crystal clear.

Part memoir and part manifesto, Dufu’s book recounts how resentment began to build as she watched her career and happiness slide following parenthood, while her husband soared professionally thanks to her handling all of the un-fun, time consuming necessities (cleaning, cooking, grocery shopping, bill paying etc.), in addition to her demanding job outside the home. And how it not only began to eat away at her happiness but their marriage and her health, until she pressed reset on the expectations of their partnership.

The book is full of eye popping statistics, among them that 40 percent of women are now the sole or primary breadwinners of their households, but 76 percent of women who work full-time outside of the home are still doing the majority of housework. She also highlights a particularly jarring study that notes that 30 percent of men admitted to doing housework badly on purpose because they knew their spouse would step in to fix it and then would do the task for them going forward.

From childhood women are conditioned that whether you become a CEO or senator, when you get home you better have a home cooked meal on the table for your family. Beyond social influences, such messages are often reinforced by our own mothers. According to the research Dufu cites, even women raised by mothers who work outside the home tend to be influenced more by images of their mothers ‎as caretakers than as lawyers or bankers. Because when mom and dad both came home from the law firm, dad sat down in his recliner and everyone watched mom serve him dinner. That sent the message that dad’s job is to go to the law firm. Mom’s job is really to cook dad’s steak the way he likes it.

So Dufu’s advice is this: Women need to make peace with dropping the ball here and there—and with never picking it back up once they do. (One of the more amusing anecdotes in the book is when her husband agrees to take over a particular chore and despite the bumps that follow Dufu refuses to “pick up the ball,” which becomes a fundamental turning point in their marriage and in saving her sanity.)

Too many women kill themselves in an office all day then come home and kill themselves making sure their kids have a home cooked meal every night, or that dishes are done every day. But Drop the Ball makes a compelling case that whether your husband orders takeout for the kids every other night or dishes only get done on weekends will ultimately have little impact on whether your child grows into a great person. Yet women spend so much time on the superfluous stuff they are too exhausted for the stuff that actually matters, that they actually enjoy and can’t delegate, like going to the gym, or checking in with their children about the school bully or having a healthy sex life with their partner. (To her credit Dufu stresses that activities that nurture physical and emotional health are not luxuries but necessities, which is why she highlights the importance of working out and being emotionally and physically connected to her husband in her journey.)

It’s worth noting that over the years when I have asked successful women the best piece of career advice they could give to other women the most popular answer hands down has been “pick the right spouse.” One news anchor shared that shortly after giving birth she was offered an extraordinary international assignment. It was her husband who encouraged her to go for it. He made it clear he had her back on the home front. If every woman had a partner like that we may not achieve full gender equality in society, but we’d be a lot closer than we are now.