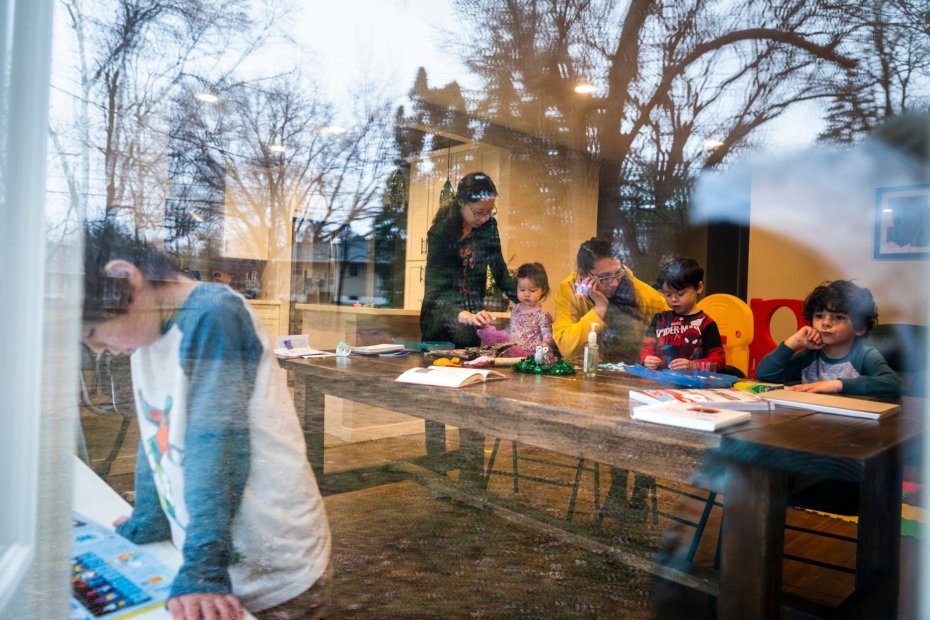 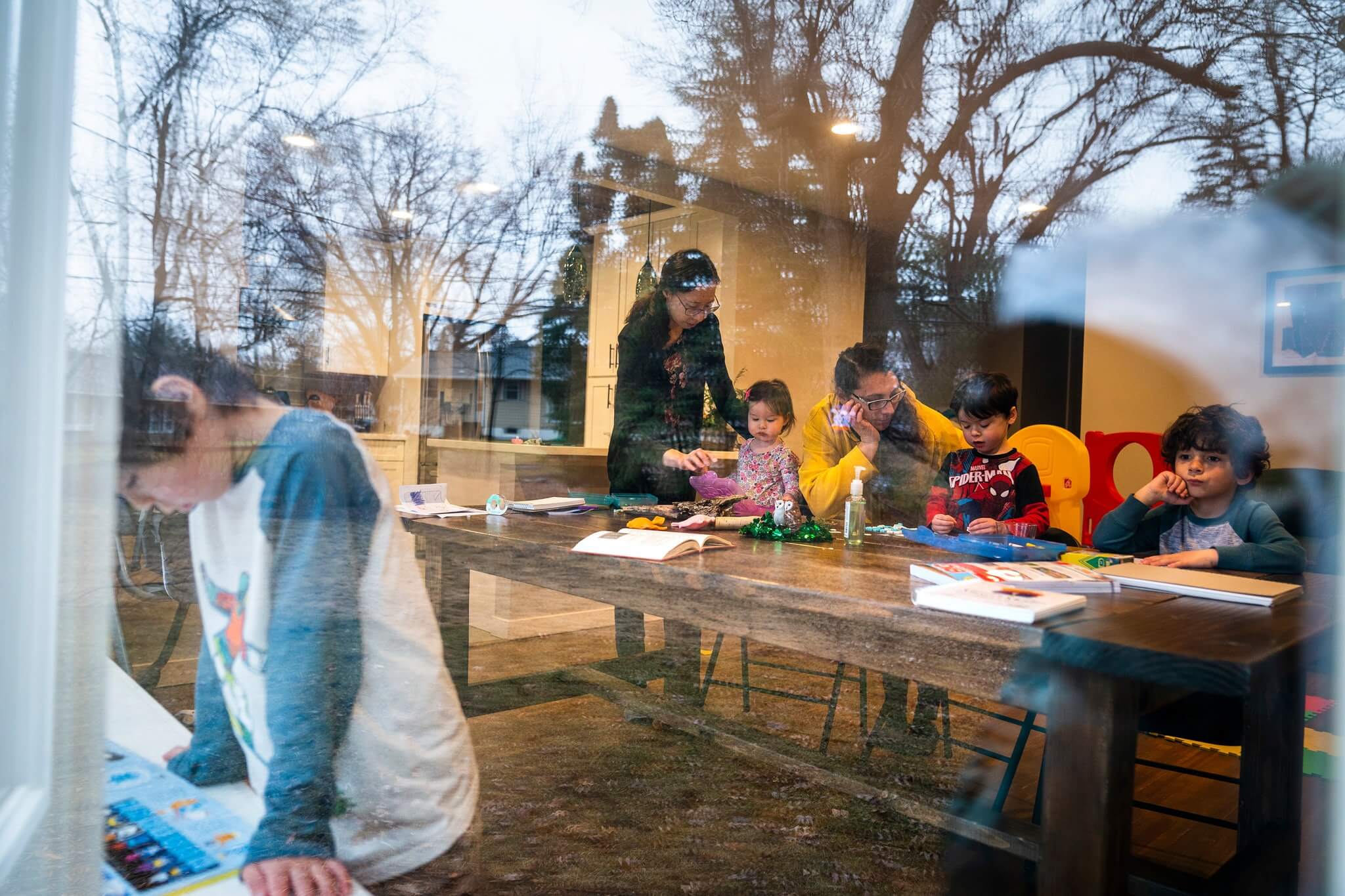 A scene of home schooling in Roseville, Minn., in March. Leila Navidi/Star Tribune, via Associated Press

Home schooling, the new parental chore brought about by coronavirus lockdowns, is being handled disproportionately by women, according to a new poll by Morning Consult for The New York Times. Fathers don’t necessarily agree — nearly half of those with children under 12 report spending more time on it than their spouse — but just 3 percent of women say their spouse is doing more. Eighty percent of mothers say they spend more time on it.

Even though men and women are both doing more housework and child care than usual during the lockdown, the survey found, the results suggest they aren’t dividing the work any differently or more equitably than they were before. Seventy percent of women say they’re fully or mostly responsible for housework during lockdown, and 66 percent say so for child care — roughly the same shares as in typical times.

Again, men and women see it differently. A much smaller share of men, about 20 percent, agree that their spouses are fully or mostly responsible for both housework and child care. About 20 percent of men say they are fully or mostly responsible for these tasks during lockdown. Only around 2 percent of women agree. Although it’s not possible to be certain about which perceptions are correct, years of past research using time diaries have consistently shown that men often overestimate the amount they do, and that women do more.

Many researchers and couples assumed women were bearing the brunt of the extra labor during the pandemic, but this is among the first efforts to quantify it at a national level. The survey asked questions of a representative group of 2,200 Americans in April. (The questions about housework and child care were asked only of people who said they lived with partners or children.)

Another, not-yet-published survey of domestic labor during the pandemic, by a University of Utah sociologist, Daniel L. Carlson, and colleagues, found that similar shares of men reported doing more than women said they did. The survey also found that mothers were primarily responsible for home schooling, even when couples otherwise shared child care responsibilities.

The additional time that women typically spend on domestic work, particularly child care, has significant consequences outside the home: It is a major reason for their lower pay and stunted career paths. Now that they’re spending even more time on these chores because of the pandemic, the repercussions could worsen.

“Being forced to be at home is amplifying the differences we already know exist,” said Barbara Risman, a professor at the University of Illinois at Chicago and part of a group of sociologists who analyzed the data. “What terrifies me for the future is if it will push women out of the labor force in a way that will be very hard to overcome.”

Already, women are doing less paid work than men during lockdown, the survey found. In couples with both people working remotely full time, 28 percent of women and 19 percent of men said they were working less than usual.

In Justin Levinson’s household in Queens, the division of labor hasn’t changed much, even though the public library where he works is closed and his wife, a lawyer, is working full time from home. There’s more to be done — they no longer have their babysitter or house cleaner, and their youngest son needs special education from home — but she still does more of it, they both said.

Mr. Levinson is candid about his share of the work. “To be honest, it’s still less than 50 percent,” he said. “It actually hasn’t changed that much.” Their sons, who are 10 and 14, still ask their mother for homework help, even though she’s the one working.

Research has shown that major changes to domestic routines sometimes have the potential to create new, more equitable ones. If both parents take leave after a baby is born, for example, they share more of the work in the long term.

Under lockdown, with pleading children and piles of dishes more visible to men, more than half of men and a quarter of women say they and their partners are splitting the housework and child care equally — something that is notable and wasn’t true a generation ago, social scientists said. In some families, current circumstances have led men to take on more, particularly if they’ve been laid off or if they can work from home and their partners can’t.

But over all, the crisis seems to be cementing traditional gender roles. 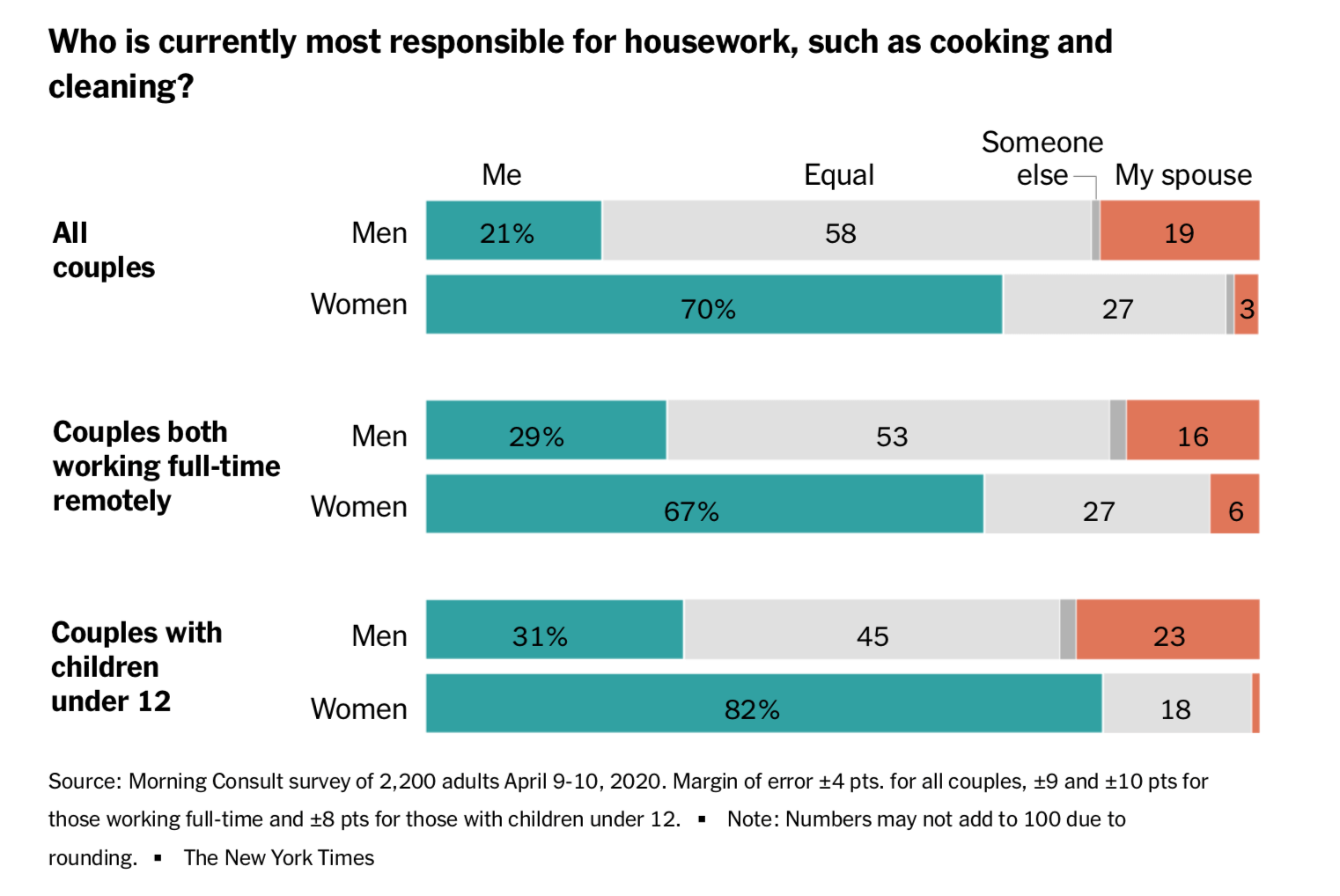 The housework gap is smaller for couples in which both members are working full time from home, but it persists: 67 percent of women and 29 percent of men in this situation describe themselves as fully or mostly responsible for housework during lockdown. 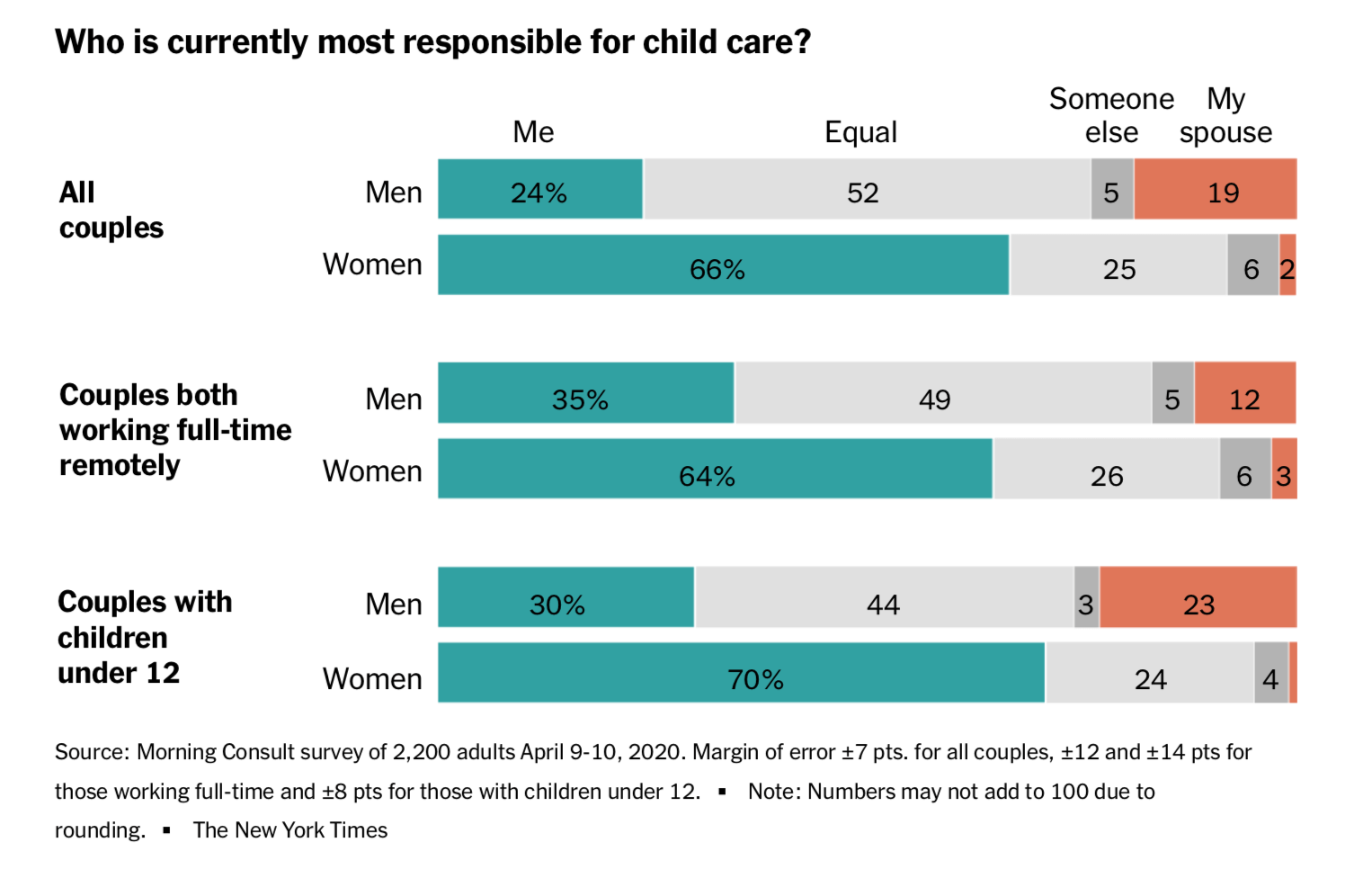 April Felker works in patient dining at a hospital in Portland, Ore., a job that requires her to go to work each day. With their three young children out of school, her husband, a construction worker, has reduced his hours to watch them. They’re splitting the chores fairly equally, she said, as they usually do — but home schooling is her responsibility.

“Trying to get anything done with three boys is a challenge,” she said.

One reason women are doing more unpaid labor during lockdown is simple — they always do. It tends to happen even if both people in an opposite-sex couple work, and even if she earns more than he does, research shows. Though men in recent years have increased the time they spend on domestic duties, particularly child care, many people still believe they are primarily a woman’s responsibility, research shows. These cultural expectations explain why women seem to have defaulted to doing home schooling, social scientists said.

“To say he does more of it is to say, ʻI’m not a good mother,’” said Kathleen Gerson, a sociology professor at New York University and part of the group that analyzed the data. “It’s a question of who stepped in when we had something entirely new to deal with.”

Men spend less time on unpaid work for another reason: American workplaces expect them to. Men in particular are often pressured to give their paid work undivided attention, research shows, a social more that has carried over from when most had spouses who weren’t employed. Even in same-sex couples, one parent often prioritizes work while the other parent prioritizes family once they have children.

Because many American workplaces offer little flexibility, mothers have been more likely to pursue careers in which they can be available at home when needed, like on snow days or sick days. Now, with schools closed for the long term, it means the bulk of the work falls to them.

In typical times, Jessica Lanan, an author and illustrator of children’s books in Boulder, Colo., appreciates that she’s her own boss. It’s easier to take time off for her 3-year-old daughter. Her husband is in tech, often working long hours to communicate with people overseas. So when day care closed, Ms. Lanan took on the majority of the child care — and reduced her paid work by about half.

“If I’m not making books, there’s no boss who will be angry with me,” she said. “But I also won’t be making a living or advancing in my career. With the school closures, now the difference is much more pronounced.”