A majority of executives believe gender diversity in leadership is linked to better financial performance, but companies take few actions to support women in the workforce.

As the number of women participating in the workforce grows, their potential influence on business is becoming ever more important. Seventy-two percent of respondents to a recent McKinsey survey believe there is a direct connection between a company’s gender diversity and its financial success.1 Indeed, the share saying so has risen in the past year, even in the face of continued economic turmoil.

Yet companies have not so far successfully bridged the gap between men and women in the top levels of management. This is not surprising, since the survey shows that diversity isn’t a high priority at most companies and that there’s great variability in the number of gender-diversity policies that companies have pursued. For both of these factors, the results suggest that more is better: at companies where gender diversity is higher on the strategic agenda and more related policies are implemented, executives say that company leadership is also the most diverse. Among respondents at companies that include gender diversity as a top-three agenda item and those at all companies, there is a 32 percentage-point difference between the shares who say women fill more than 15 percent of their C-level positions. The degree of support from CEOs and other top managers is another important factor influencing a company’s performance on diversity, respondents say, so it is notable that few companies’ top management teams currently monitor relevant programs. The differences executives report at the most diverse companies suggest some ways all companies can improve their gender diversity and, eventually, financial performance.2

Who thinks women matter?
Since last year’s survey, the share of respondents who believe there is a connection between diverse leadership teams and financial success increased 12 percentage points, to 72 percent.3 And though more women than men think so (85 percent, compared with 58 percent), it is notable that a majority of men agree.

By contrast, the share of respondents whose companies have gender diversity as a top-ten agenda item has held steady at 28 percent. There has, however, been some movement at the bottom: last year, 40 percent said it was not on their companies’ agenda at all, and this year that figure has fallen to 32 percent.

Around the world, more than 80 percent of respondents say that since the financial crisis began, there has been no change in their companies’ view of gender diversity as a strategic issue, no matter what that view is; this figure seems at odds with the rise in the past year in the share of those who believe that companies with more women leaders perform better. Respondents in Asia-Pacific and developing markets are likelier to say gender diversity has become a more important strategic issue at their companies (Exhibit 1). 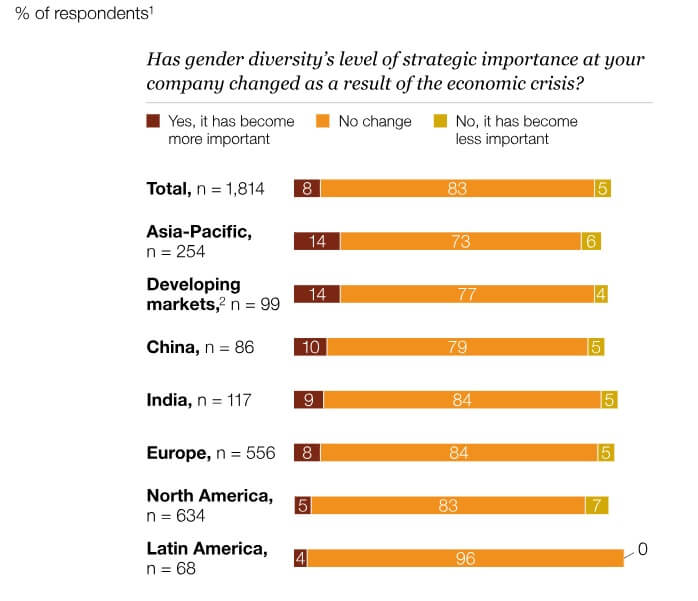 Gender diversity in (in)action
Not surprisingly, the higher the priority of gender diversity, the more likely a company is to take actions in support of it. While the average number of actions a company takes is only 2.5 out of the 13 the survey asked about, that figure rises to 5.0 at companies where gender diversity is a top-three agenda item. When asked to select the actions their companies have implemented, respondents most frequently choose flexible working conditions (Exhibit 2), and the share of respondents who say their companies enable this has jumped 13 percentage points since last year, to 43 percent. After flexible working conditions, respondents say that their companies are likeliest to have implemented support programs for reconciling work and family life, as well as programs to encourage female networking and role models, both in equal shares (29 percent).

It’s notable, if not surprising, that larger companies are likelier to take more actions to achieve diversity: more than half of respondents at companies pursuing seven or more measures have more than 20,000 employees, compared with 19 percent at the smallest companies.

The responses of C-level executives highlight a few actions that seem to boost gender diversity markedly. For each potential action, we divided companies into two groups: those where respondents say they had taken the action and those where they had not. We then looked at the share of companies with more than 15 percent of women at C level. Three actions stand out: visible monitoring by the CEO, skill-building programs aimed specifically at women, and encouraging or mandating senior executives to mentor junior women. 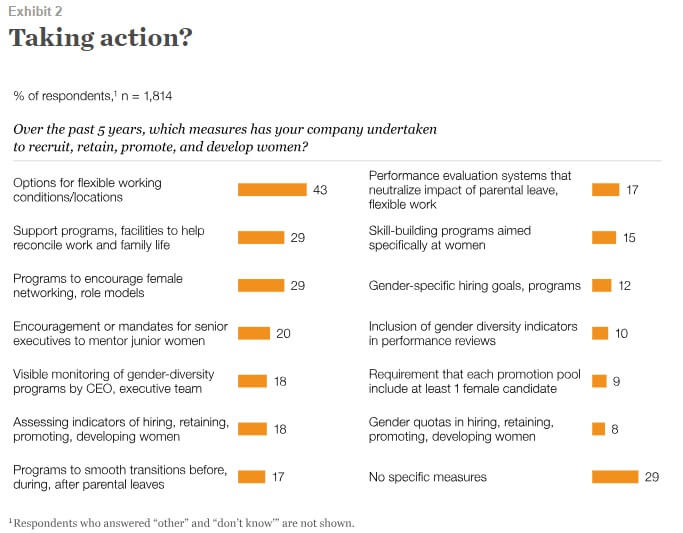 Responses also indicate substantial region-by-region differences in approaches to recruiting, retaining, promoting, and developing women employees. Respondents in China and developing markets say their companies are more likely to use hard measures—gender quotas or requirements for female representation in promotion pools, for example—than those in Asia-Pacific or North America, where companies rely more on soft measures such as flexible working conditions or mandates for senior executives to mentor junior women (Exhibit 3). 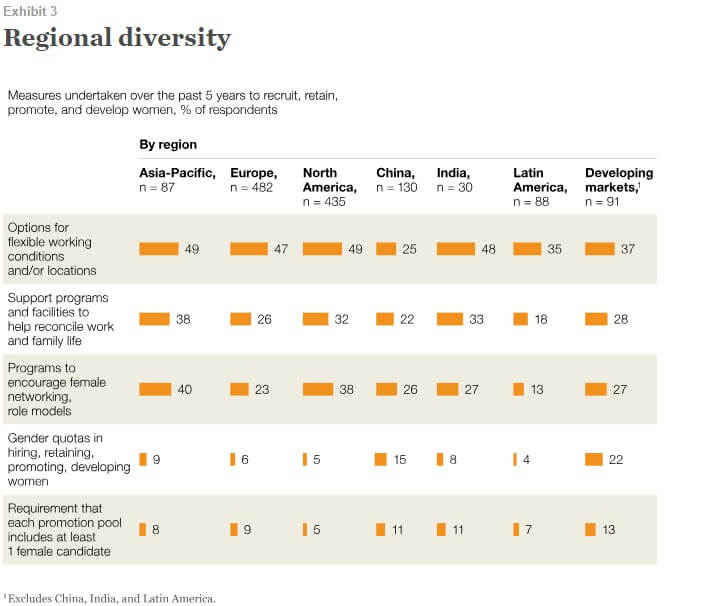 How CEOs can overcome barriers
The last piece of the gender diversity puzzle, this survey suggests, is how engaged the CEO and top management are in following the progress of gender diversity programs. Just 18 percent of respondents say their companies’ CEO and executive team visibly monitor these efforts, though nearly half say visible monitoring has the biggest impact on increasing gender diversity in general—more than any other tactical measure (Exhibit 4).

Twice as many women as men say a low level of CEO and top-management commitment is one of the biggest barriers to implementing gender diversity at their own companies (Exhibit 5); the single most frequently chosen barrier among all respondents, however, is a lack of awareness of or concern for gender diversity as a critical matter. A very small share—just 7 percent—of all respondents say their companies have had difficulty in implementing a top-management monitoring policy. Of those respondents whose companies have implemented monitoring in the past five years, 65 percent of them say the measure was impactful; this is a higher share than that of any other action for which executives report using and, subsequently, having an impact on company diversity.

C-level executives are aware of their potential impact: 49 percent of men and 60 percent of women in top management agree that their visible monitoring has the biggest impact on increasing diversity at corporations in general. 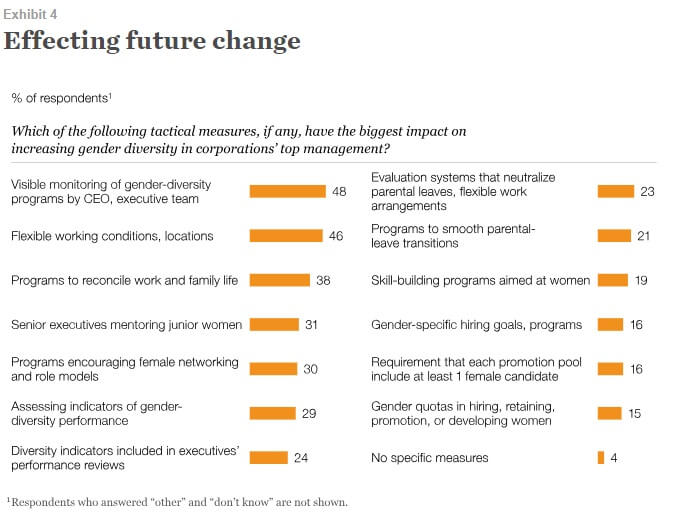 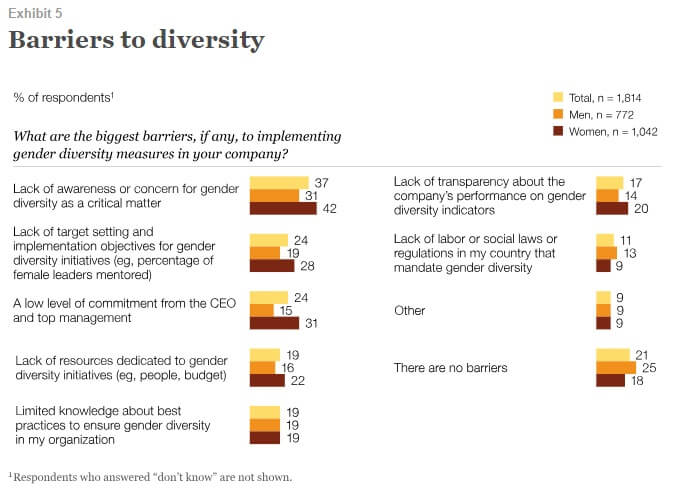 Looking ahead
A majority of executives believe that gender diversity improves financial performance, but far fewer translate that belief into action. Improvement in gender diversity can result from increasing top-management attention—from both men and women—and positioning it higher on the strategic agenda.

The contributors would like to thank Georges Desvaux, a director in the Paris office, for his extraordinary contributions to this work.