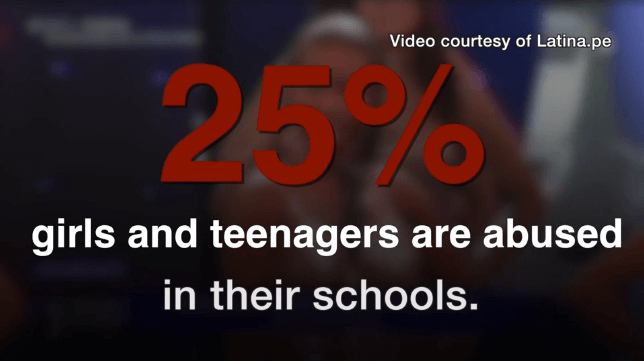 Participants in Peru’s Miss Universe Pageant broke with tradition and recited statistics detailing violence against women rather than give their body measurements.

The 23 aspiring beauty queens were hoping to get through to November’s Miss Universe Competition in Las Vegas.

Instead of giving their bust, waist and hip size, the contestants took turns reciting a roll call of shocking data.

One contestant said a girl dies every 10 minutes due to sexual exploitation in Peru.

Another said more than 70% of women in the country are victims of street harassment.

The contest organiser, Jessica Newton, told the AFP news agency: “Unfortunately there are many women who do not know, and think they are isolated cases.

“I think that the fact that you are looking at your regional representative, at the queen of your department, giving open and real figures about what is happening in our country is alarming.”

She said out of the 150 participants in Peru who had begun the contest, five had been victims of violence, including rape.

At the end of the evening the pageant contestants were asked what they would do about violence, instead of lightweight questions about hobbies and ambitions.

The winner of the Peru pageant, Romina Lozano, representing Callao department, said her plan would be “to implement a database containing the name of each aggressor, not only for femicide but for every kind of violence against women. In this way we can protect ourselves”,

The contestants are planning to lead a march to highlight violence against women in Lima in November.

According to the Observatory of Citizen Security of the Organisation of American States, Peru ranks as second only to Bolivia with the worst record of violence against women in South America.

The Peruvian government says 800 women have been murdered in gender-related violence in the six years leading up to 2015.

Peru’s Congress passed a law in September 2015 providing comprehensive measures to prevent and punish violence against women and set up shelters and temporary refuges for women.

Gender-based violence has been a hot issue in Peru.

Last year tens of thousands of women demonstrated in Lima and other cities calling on the authorities to do more to stop it.