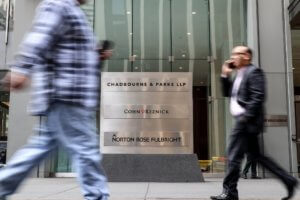 By all accounts, Mary T. Yelenick had a stellar career at Chadbourne & Parke, the New York law firm where she spent 35 years, rising to the position of chairwoman for the product liability practice.

She retired in December to words of praise from the firm.

But in March she joined a lawsuit brought by a colleague, Kerrie L. Campbell, that accused the firm of sex discrimination and pay inequity. Ms. Yelenick’s change of heart followed a letter.

Within weeks of Ms. Campbell’s lawsuit in August, Chadbourne circulated a letter disavowing its claims. Fourteen female partners signed the letter, which criticized the description of the firm as “patriarchal” and urged that the lawsuit be withdrawn.

Ms. Yelenick, 62, did not sign the letter, but after looking at a draft, she said in an interview, she “disagreed strongly because the letter contained inaccuracies, including the process that female partners could use to join any potential class or collective action that a court certifies.”

“My decades of experience,” she said, “has made me aware of the many ways — both overt and more subtle — in which both institutional structures and informal practices continue to work to impede the advancement, and discount the contributions, of women.”

The third female partner who joined the lawsuit is Jaroslawa Z. Johnson, an American lawyer who headed Chadbourne’s office in Kiev, Ukraine, for a decade. She remained in Kiev after the office closed in December 2014, and noted during her time there that firm data “showed that my revenue generation was higher than many male partners, but my compensation was much lower.”

“Male partners,” she said in an email, “who generated less revenue annually made much more than I did.” She decided to join the lawsuit, she said, once she read Ms. Campbell’s complaint.

All three plaintiffs have maintained in legal papers that the firm’s female partners have been “systematically disparately underpaid, systematically shut out of firm leadership, demoted, de-equitized and terminated.” The class-action suit asks for $100 million for sex discrimination and pay inequity.

That is a description that Chadbourne is contesting. Its lawyer, Kathleen M. McKenna of the Proskauer Rose law firm, did not respond to a request for comment for this article. But the firm has argued in legal papers that each of the three women suing was paid differently because each had “unique experiences and roles” at the firm.

Chadbourne also maintains that the three were partners and thus were not covered by federal equal pay act protections.

The lawsuit and its public aftermath — including the firm’s cutoff of Ms. Campbell’s compensation and its vote to oust her from the partnership on the eve of Chadbourne’s merger with Norton Rose Fulbright — have spurred discussions about pay among women at other large law firms.

And it is not the only legal dispute to emerge over compensation for female partners.

In July, Traci M. Ribeiro, 46, a lawyer, sued Sedgwick, a San Francisco-based international litigation and business law firm, saying she was not promoted to full partner or paid commensurate with the amount of business she was bringing into the firm. The firm called her lawsuit, which depicted Sedgwick’s culture as clubby and paternalistic, a “self-serving” and “disingenuous” exercise in a legal filing to move the contentious dispute to arbitration.

And the firm, in the same legal papers, called Ms. Ribeiro, who was a top earner in Sedgwick’s insurance practice in its Chicago office, a “quisling” — a World War II-era term for a traitorous collaborator.

Last month, the firm came to terms with Ms. Ribeiro in arbitration. The outcome was confidential, and neither side is commenting.

A resolution may be rockier for Ms. Campbell’s lawsuit, which Chadbourne has publicly labeled a “national smear campaign” and a “cynical pursuit of a big and undeserved payday.”

For women who question the fairness in partnership compensation, the customary solution had been to quietly move to another firm. A number of female lawyers are now arguing that the legal profession has had ample time to get used to women in its ranks and needs to be held accountable, either in court or in mediation or arbitration.

“Chadbourne ripped off the Band-Aid that a lot of firms put on pay disparities,” said David W. Sanford of Sanford Heisler Sharp, who represents Ms. Ribeiro as well as the plaintiffs in the Chadbourne case, and is counseling other practicing lawyers over challenging pay disparities.

Barely 20 percent of women have reached firm partnership status despite the high number of women who are entry-level associates at many major firms. When they graduate from law school — where women are now just over half of students — women are paid in lock step with male colleagues, but once they make partner, their compensation can be widely divergent from that of their male counterparts.

Female law partners on average earn about one-third, or about $300,000, less annually than their male colleagues, according to a survey of 2,100 partners at law firms nationwide released last fall by a legal search firm, Major, Lindsey & Africa. Over several years, that adds up quickly to a million dollars or more in lost compensation for a female lawyer.

Lawsuits and studies that aggregate results on firm pay leave female lawyers at the midpoint in their careers wondering if they should contest the edge they see men having in receiving promotions, leadership positions and compensation.

“If there is no one to turn to, and no hope of being treated fairly,” said Rebecca L. Torrey, an employment and labor law lawyer with the California firm Elkins Kalt Weintraub Reuben Gartside, “why wait for decades to be paid the same?”

To be sure, there have been women who have risen to the top of their firms, including Faiza J. Saeed, who became the first woman to lead the elite law firm Cravath, Swaine & Moore.

But several female lawyers said in interviews that they were essentially stuck as “service partners.” They churn out the legal work, but do not have opportunities to mingle with clients in ways that can generate the kind of high-value business that wins the big paychecks, they said. The women spoke on the condition that they not be identified, fearing reprisals from their firms.

One lawyer said she had left her Los Angeles-based law office this year after the male partners all got bonuses — and the women got none. She said that firms often advanced reasons, but that those reasons were often influenced by subjective factors like friendships or camaraderie.

Chadbourne, like some other major firms, circulates charts with equity partner payment figures, which contain pay disparities that can seem glaring and inexplicable, the plaintiffs say.

“The matrix of factors was there,” Ms. Yelenick recalled, but “it just didn’t add up.”

In 2013, the base pay of Chadbourne’s male partners was, on average, 40 percent more than that of their female colleagues, according to filings in the legal case. Last year, there was a 21 percent difference between the firm’s male and female partners, according to the documents.

Ms. Yelenick and the other plaintiffs say a big part of such pay differences stems from origination credit, which means getting credit for business brought into the firm — either initially or for other legal matters that have flowed from the original client relationship.

“Originations are nothing more than inherited business, passed down over the years from one male partner to another,” she said.

Women, Ms. Yelenick said, “have not historically been part of that chain of inheritance” because the all-male management teams “frequently reward those attorneys with whom they feel most comfortable personally and socially.”