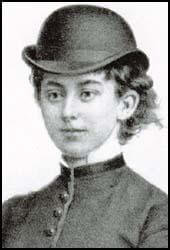 Florence Douglas, the daughter of Archibald William Douglas, 7th Marquess of Queensbury, and her twin brother, James, were born on 25th May 1855. Three years later the their father died in a shooting accident. It was widely believed that the Marquess had committed suicide. In 1862 Florence’s mother converted to Roman Catholicism and fled to Paris with her children.

Florence was educated at home and in a convent. In 1875 she married Sir Alexander Beaumont Churchill, 11th Baronet Dixie. The couple lived at Bosworth Hall in Leicestershire. After having two sons, John and Albert, Florence, her husband, and her twin brother, travelled to Patagonia. When she was asked why she replied that she wanted “to flee from the strict confines of polite Victorian society”. In 1880 she published her best-selling travel book, Riding Across Patagonia.

In 1879 she gained a commission as war correspondent for The Morning Post and covered the Zulu Wars in South Africa. It is believed that she was the first British journalist to report from a war zone. On her return to England she published Land of Misfortune (1882).

Lady Florence Dixie also supported Home Rule for Ireland. However, she was highly critical of the Irish Land League and survived an assassination attempt by Fenians. Queen Victoria sent John Brown to investigate the case. Unfortunately he caught a chill and died while on the case.

Lady Dixie also wrote novels with a political message. She proposed equality of the sexes in marriage and divorce, identical male and female clothing and reform of the royal succession to allow the oldest child of either sex to inherit the throne. A member of the National Union of Women’s Suffrage Societies she published The Revolution of 1900 in 1890. Described as a feminist fantasy, the book features an heroine whose activities lead to women winning the vote. The last chapter is set in 1999 where a peaceful and prosperous Britain is living under female rule.

Lady Dixie remained close to her twin brother James and she was devastated when he committed suicide by cutting his throat on 4th May 1891. Lord Dixie also had serious financial problems and was forced to sell his family home, Bosworth Hall.

In 1895 Nettie Honeyball established the British Ladies Football Club. Lady Dixie agreed to become president on condition that “the girls should enter into the spirit of the game with heart and soul.” She also arranged for the football team to tour Scotland.

Lady Dixie arranged for the British Ladies teams to play some games in Scotland. The local newspaper poked fun at the women. One journalist commented: “One of the full-backs was suspected of playing in her brother’s knickers. The fair player was frequently asked for the name of her tailor.”

Other books by Lady Dixie included the novel Redeemed in Blood (1889). She argued against the hunting of wild animals in The Horrors of Sport (1891). In The Evolution of a Mind (1903), she expressed her growing atheism and her views on the liberation of women. She also provided a feminist introduction to Joseph McCabe’s Religion of Woman (1905).