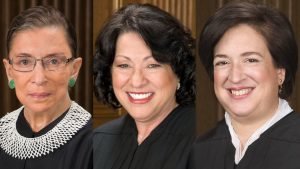 It’s a tale as old as time — no, not the tale of Stockholm Syndrome sweeping the box office — the reality every woman in the workplace knows: men interrupt women. And now there’s a study by Northwestern School of Law Professor Tonja Jacobi and law school student Dylan Schweers that proves, yup, it happens to Supreme Court justices too.

It’s a bit of a bitter pill to swallow. No matter how educated, how important you become, it will still be generally acceptable to interrupt you (as long as that “you” is a female one).

The study looked at oral arguments from the current Court as well as from years when female jurists joined the Court, tracking not only when male justices interrupted but also when male attorneys appearing before the Court felt the need to say their piece. The results are not encouraging. As the authors reveal in an article about the study on SCOTUSblog:

“Our empirical study examines interruptions among justices, and between the justices and the advocates, during Supreme Court oral arguments. It shows that women still do not have an equal opportunity to be heard on the highest court in the land. In fact, as more women join the court, the reaction of the male justices and the male advocates has been to increase their interruptions of the female justices.”

And the numbers reveal it isn’t just happenstance:

Of course, this probably isn’t a surprise to Court followers. Adam Feldman, of the fantastic Empirical SCOTUS, tracked the number of interruptions during the last Term, and found the women justices did not fare well (though he only tracked interruptions by fellow justices).

Jacobi and Schweers are unafraid to make a larger point about the interruptions — it isn’t just about niceties. It can have a larger impact on the type of justice dispensed by the Court:

“Such behavior matters beyond simple rudeness: Oral arguments shape case outcomes. This pattern of gender disparity in interruptions could create a marked difference in the relative degree of influence between the male and female justices. Furthermore, oral arguments serve other purposes, including: focusing the justices’ minds, helping them gather information to reach decisions as close as possible to their desired outcomes, and providing an opportunity to communicate and persuade their colleagues. When a justice is interrupted, her point is left unaddressed, and her ability to influence the outcome of a case or the framing of another justice’s reasoning is undermined.”

Understanding the way that gender dynamics play out for highly competent, intelligent, and accomplished women such as Ruth Bader Ginburg, Sonia Sotomayor, and Elena Kagan is key to realizing just how deep-seated these biases remain. And the frustration you (other professional women) feel over your own interruptions isn’t in your head, it happens to the very best of us.

Kathryn Rubino is an editor at Above the Law. AtL tipsters are the best, so please connect with her. Feel free to email her with any tips, questions, or comments and follow her on Twitter (@Kathryn1).