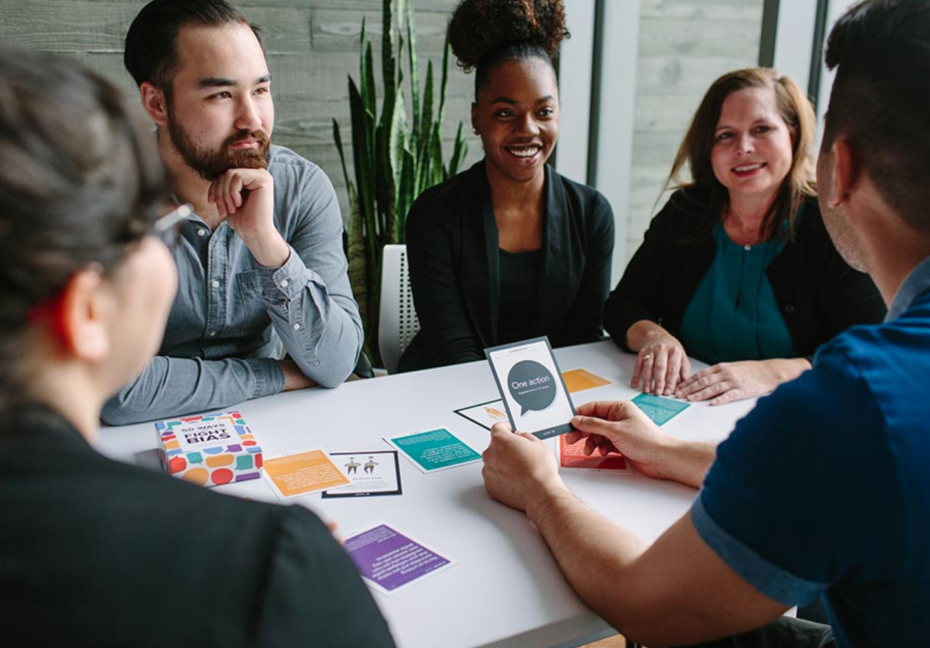 We’ve said it before, and we’ll say it again: Equality can’t wait. According to the World Economic Forum, at the current pace of change, it’s going to take 208 years to achieve gender equality in the United States. But it doesn’t have to be this way. If we all commit to taking action, change is possible.

We asked LeanIn.Org—an organization that helps women achieve their ambitions and create a more equal world—to help us break down unconscious bias and the five most common types of gender bias and offer concrete steps we can all take to fight bias in the workplace.

What is Unconscious Bias?

We all have unconscious biases—our brains take in more information than they can process, so we rely on mental shortcuts to simplify the world around us. In other words, we rely on stereotypes to make quick judgements. There are five main ways that bias shows up in the workplace.

Performance bias is based on deep rooted—and incorrect—assumptions about women’s and men’s abilities. We tend to underestimate women’s performance, and overestimate men’s.

What you can do: If you’re on a review committee and a colleague argues against a woman’s promotion because they don’t see her “as a leader,” even though her team delivers outstanding results, point out that the woman’s team delivers superb results, and suggest that their performance speaks to her leadership. You can also ask them to explain the attributes she lacks. When people are asked to justify their thinking, it can help reduce bias in decision-making.

As a longer-term solution, suggest creating detailed metrics for performance reviews, including clear expectations for leaders. This way, all employees will be evaluated based on a more complete definition of good leadership and using the same standards, which reduces bias in the review process.

Attribution bias is closely linked to performance bias. Because we see women as less competent than men, we tend to give them less credit for accomplishments and blame them more for mistakes.

What you can do: Notice when a man (inadvertently or otherwise) presents a woman’s idea as his own, and remind everyone that the idea originated with your woman colleague: “I think [Name] made that point a few moments ago. I like this direction.” Advocating for women coworkers in this way can help them get noticed for their contributions—and it can also position you as a leader.

Likeability bias is rooted in age-old expectations. We expect men to be assertive, so when they lead, it feels natural. We expect women to be kind and communal, so when they assert themselves, we like them less.

What you can do: If a colleague says they don’t like how a woman bragged about her strengths or accomplishments in an interview, ask them to explore their thinking: “That’s interesting. Do you think you’d have that reaction if a man did the same thing?” You can also reframe what happened: “I noticed that too, but I don’t see it as bragging. I just thought she was talking confidently about her talents.” It’s also worth pointing out that a job interview is exactly the place to talk about your strengths.

Motherhood triggers false assumptions that women are less committed to their careers—and even less competent.

What you can do: If someone on your team says that a woman may not be a good choice for a high-profile project because she just had a baby, remind them that this could be a career-changing project for whoever gets it, so it’s better to let the new mom decide for herself whether or not she wants to take it on.

Affinity bias is what it sounds like: we gravitate toward people like ourselves in appearance, beliefs, and background. And we may avoid or even dislike people who are different from us.

What you can do: If you realize that a colleague who is a man only mentors other men, talk to your colleague. Explain why mentoring is so valuable and share your observation that he only mentors men. Recommend he mentor at least one woman, and offer to help him identify a few promising candidates. If he confides he’s uncomfortable being alone with women, point out that there are plenty of public places to meet—and remind him that mentorship really matters. Lean In and McKinsey’s Women in the Workplace report shows that 59% of Black women have never had an informal interaction with a senior leader.