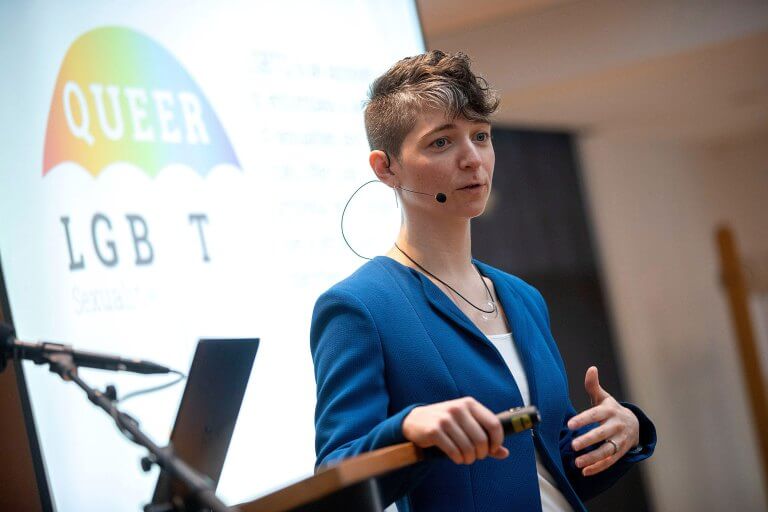 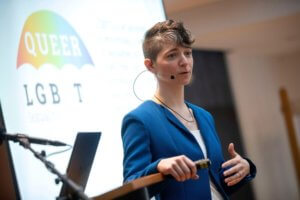 “Forty-six percent of LGBTQ people hide who they are at work,” said Stephanie Huckel. “Fifty percent of non-LGBT workers don’t think there are any LGBTQ people at their workplace.” (Kris Snibbe/Harvard Staff Photographer)

Some still bristle when they hear it, but in 2019, when used to describe a gay person, “queer” doesn’t carry the same pejorative connotations that it might have 25 or 30 years ago.

“Don’t use it unless you feel comfortable explaining why you’re using it,” she said in explaining the importance of using the appropriate language to describe nonbinary people. “If you don’t get it, ask, even if it makes you feel uncomfortable.”

Huckel pointed out that “queer” was “an ‘in group’ word for a long time — if you were a part of that community.” And even though it has evolved and become more generally accepted, she admitted that she’s cautious when using the word in front of an audience of “gay and lesbian elders.”

Speaking to a full house, Huckel’s broad, comprehensive talk was a tutorial in how to be sensitive to everyone while navigating the gender landscape in the workplace. She provided “approaches and tools for communicating with — and to — the LGBTQ [lesbian, gay, bisexual, transgender, and queer] employees in a way that sends the message, ‘You are welcome here.’”

Getting down to the very basics and recognizing that members of her audience might fall anywhere on the spectrum of knowledge of the LGBTQ community, Huckel said that “queer” is an umbrella term under which numerous identities may reside. She said people often use that all-encompassing word because the list of letters keeps growing.

“Gender is one of those things everyone thinks they understand, but most people don’t,” she said. “It’s not binary. It’s not either/or. In many cases, it’s both/and. It’s a bit of this and a dash of that.

“Fifty percent of non-LGBT workers don’t think there are any LGBTQ people at their workplace,” Huckel said. “I guarantee you, they are wrong. And, even if they are not wrong, they don’t know for sure … unless someone has been very direct and honest.”

For example, she pointed out that because someone has been married to someone of the opposite gender for 30 years, does not necessarily mean they are heterosexual. “It does not speak to their attractions or connections to other people,” she said.

“Forty-six percent of LGBTQ people hide who they are at work,” said Huckel. Thirty-eight percent do so because they are afraid of being stereotyped, 36 percent think they may make others uncomfortable, 31 percent worry about losing relationships with co-workers, and 27 percent are concerned that a co-worker may think that they’re attracted to them just because they are LGBTQ, she explained.

What happens in the workplace when people hide some of the elements of who they are is that they do not bring their whole selves to work, and may not be as productive. “I am talking about people who are hiding in a very deliberate way: people who pretend they don’t have a partner, change the pronoun of their partner, people who lie about their experience over a weekend because it might reveal that they are gay or trans,” she said. “When they are spending so much energy literally hiding, that has real impact on individuals and their ability to show up.”

How does one avoid the pitfalls? Avoid heterosexualism, “which comes from default thinking” — assuming a person is heterosexual unless there is a major visual clue to the contrary. “Our brains do this as part of our unconscious bias,” Huckel said.

If, for example, “we see a feminine person with a wedding ring, we ask them what their husband’s name is. Now, that person, who does not have a husband, is thinking, ‘OK, I was not planning on coming out today, so my options are, I’m going to lie about it … or suggest that it is not a wedding ring, or [I] may jump right in and come out and hope that this goes OK.”

Huckel warned against using words such as “he-she,” “it,” or “tranny.” Don’t share a person’s LGBTQ identity with others, unless specifically given permission to do so. And never “ask about a person’s body parts, sexual practices, or medical information.”

Huckel suggested a variety of practices to improve the environment for LGBTQ people in the workplace. In addition to language, she said human resource departments should look carefully at policies and procedures, including EEO and anti-harassment policies. “Are they inclusive? What do your dress codes say? How do we neutralize those?” In recruiting and onboarding, “Make sure that LGBTQ folks feel welcomed and valued even if you don’t know if they are LGBTQ.” Know what level of benefits LGBTQ employees receive in comparison to their heterosexual counterparts.

Huckel ended on a positive note. “We’re seeing more and more — as a best practice — workplace gender-transition guidelines … a document that outlines what happens when a newly out transgender person … or person who is newly transitioning” comes out. The purpose of such a policy is to “make sure trans folks feel supported, that there is a transparent process that is accessible to them and they know what to expect before approaching that conversation with a superior or someone from HR. It also helps the HR folks know what to do.”

Sonia David, administrative coordinator for the Harvard Foundation for Intercultural and Race Relations, agreed. “I think discussing the language of LGBTQ inclusion will be helpful in developing a leading-edge approach to creating effective inclusion and belonging initiatives at Harvard. Participants were empowered to engage in the process of self-education, which is a first step toward cultural change,” she said.

Sheehan Scarborough, director of Harvard College BGLTQ Student Life, said the dialogue “gave us an opportunity to see how people are thinking about LGBTQ inclusion across the University. There was a lot of enthusiasm in the room, so I know folks are ready to go deeper. The next step is to begin centralizing our resources so that LGBTQ support is easily accessible campus-wide, with a clear point of reference for our best practices.”