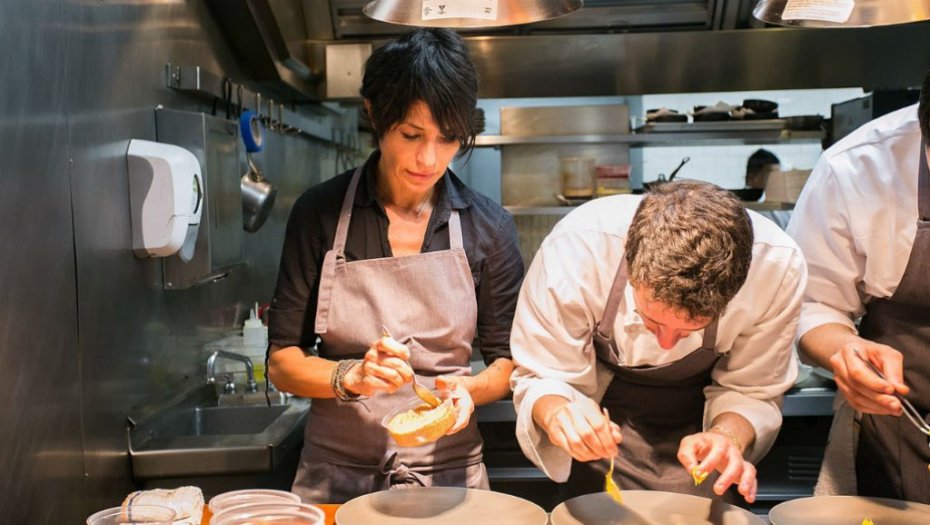 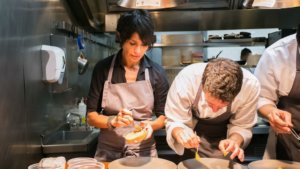 City Foodsters/Wikimedia Commons | Chef Dominique Crenn at her restaurant Atelier Crenn in 2013. On Thursday, she became the first woman in the US to earn three Michelin stars.

“It’s an amazing recognition,” an elated Crenn told AFP after the announcement was made by the Michelin Guide. “Amazing for my team and all the work we have done over the years.”

Crenn said she had been celebrating, drinking rose wine all day, and planned to party further with guests and her team later in the evening.

“Who knew that one day Dominique Crenn will get three Michelin stars with her team,” she gushed.

Crenn said she hoped her success would inspire young women to push ahead with their dreams.

“I tell them today, ‘You can do anything you want to do’, it has nothing to do with gender,” she said. “Go out there and just do it. Never let someone stand in your way.”

SingleThread, another restaurant in the Bay Area, was also awarded three stars.

The Michelin Guide said in a statement that it was impressed by the food scene in the San Francisco area, especially as concerns this year’s laureates.

“In particular, the teams at Atelier Crenn and SingleThread should be extremely proud, as our inspectors were very impressed by the quality of the produce used in the preparation of the dishes,” it said. “This, along with their meticulous attention to detail, creativity, and dedication to delighting their customers, means they always offer diners a memorable and very enjoyable gastronomic experience.

“Without a doubt, they are definitely worth a special journey!”

The distinction bestowed on Crenn is a sweet rebuke for the 53-year-old chef, who was snubbed earlier this year by the 50 Best Restaurants guide.

Crenn, who grew up in France, has said that she inherited her interest in cuisine from her parents, who enjoyed fine dining.

She began her formal kitchen training in San Francisco in 1988 and in 1997 moved to Indonesia, heading the kitchen at the InterContinental Hotel in Jakarta.

She moved back to California in 1998, working as executive chef at a Manhattan Beach restaurant for several years.

Atelier Crenn was launched in 2011, quickly earning its first Michelin star and a second in 2012.