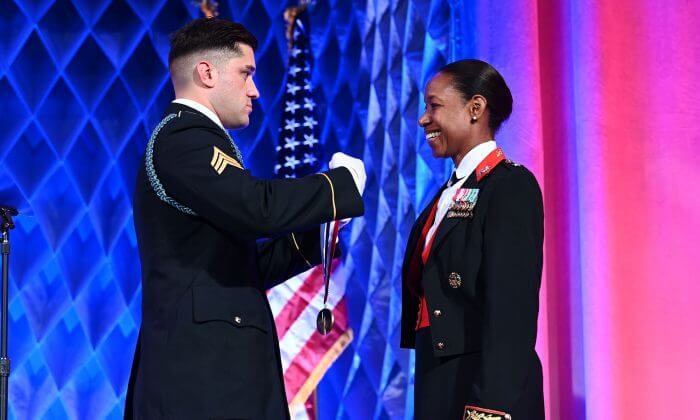 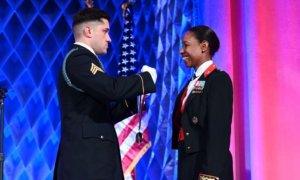 Honoree Lorna Mahlock accepts her medal on stage during the 34th Annual Ellis Island Medals Of Honor Ceremony hosted by EIHS at Ellis Island in New York City on May 11, 2019. (Noam Galai/Getty Images)

The U.S. Marine Corps has seen some historic milestones for female Marines during the Trump administration. Among these, one former Colonel Lorna M. Mahlock reached the crowning achievement of becoming the first black female brigadier general to serve in the Marines.

Among the many people to congratulate her was President Trump’s own daughter-in-law Lara Trump, who commented on Twitter: “Thank you @realDonaldTrump for this historic nomination. If you were a Democrat, this would be the headline of every paper today. Congrats to Col. Lorna Mahlock, First Black Woman Nominated to Be Marine Corps Brigadier General.”

That’s quite a few letters behind her name to certify her tactical expertise.

Mahlock has served overseas, in Germany and Japan, and has held a range of important jobs. She served as an air traffic control officer and held several command positions globally. She also served as a Marine Aviation Weapon and Tactics Instructor and was also the director of the Marine Corps Instructional Management School.

This lady has put in her paces.

But she wasn’t the only woman to blaze a new trail in the Marine Corps that year.

It’s now been over four years since all combat jobs in the U.S. military became open to women, and headway is already being made. Last year also saw the first female Marines’ entrance into an infantry battalion at Camp Lejeune in North Carolina. They were designated to serve in the 1st Battalion of the 8th Marine Regiment.

Counted among these fighting women were specializations in rifleman, machinegun, and mortar, according to a Marine spokesman.

Last year, woman made up just 8 percent of those serving in the Marines. That makes Brigadier General Mahlock one of their crowning achievements.