In Rajasthan, a social project employs audio stories accessed by mobile phones to talk about child marriage and puberty. 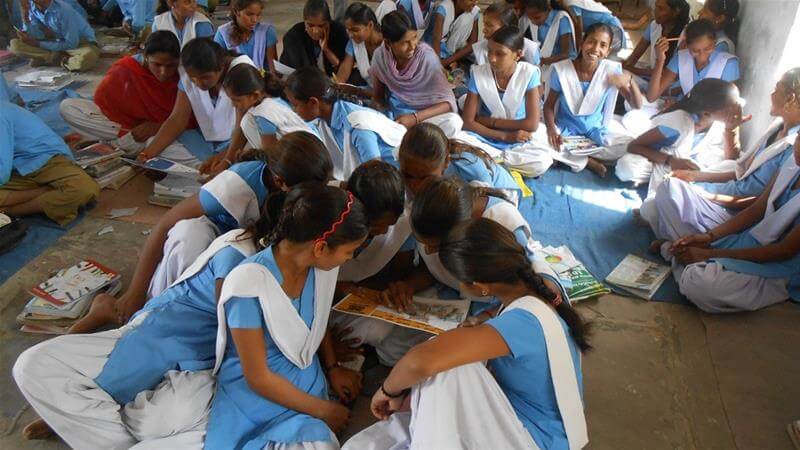 Rajasthan, India – Nineteen-year-old Sahil*, who lives in Kolaheda village in the northern state of Rajasthan, felt embarrassed and confused about the way his body changed during his adolescence.

It was not the kind of subject anyone in his village ever discussed and neither his parents nor his relatives volunteered any information.

Then he heard a story on his mobile phone, accessed through a toll-free number.

“I liked the way the grandfather in the story openly discusses the topic of bodily transformation with the kids,” he says. After hearing it, he stopped feeling ashamed.

“I have heard all the stories many times, and even shared it with my friends.”

The stories Sahil listens to are part of a Hindi-language interactive audio series disseminating information to teenage boys about gender and sexual issues in an engaging way.

The programme, called Kishor Varta, which in Hindi means “Discussion for Adolescents”, was introduced to about 250 villages in Bundi district of Rajasthan, the Indian state with the largest gender gap in youth literacy rates and the second-highest number of domestic and sexual violence cases. Across the state, child marriages are widespread – the median age at which girls are married is 15, and for boys, it is 19; the legal marriage ages are 18 and 21 respectively.

Educating about male privilege
The story Dada ka Gussa – Grandfather’s Anger – the one which Sahil first listened to, addresses sex education, and is one of four available stories, each 10 to 15 minutes long with relatable, compelling fictional characters.

Halfway through a story, callers are asked to respond to multiple-choice questions in order to listen further. The caller is told whether their answers are correct or not and why, allowing the boys a chance to reflect on where they stand on the issues before the plot progresses.

“We focus on men and boys because we cannot achieve gender equality without involving men and boys in the conversation,” says Badar Uzzama, from the Centre for Health and Social Justice (CHSJ), a New Delhi-based charity that launched the programme through the toll-free number 1-800-112013 back in July 2015.

“As adolescents, they are at a vulnerable and influential stage and could be encouraged to work with girls and women in their homes, schools and communities to bring change in unequal gender relations,” says Rimjhim Jain, the programme manager.

“It is about holding them also accountable for changing gender social norms by reflecting on their own male privileges and preferential treatment and opportunities.”

The use of mobile phones – ensuring privacy, mobility, and conducive to listening at one’s own pace – encourages a large number of callers. About 1,000 boys call each day – though not all calls go through to the end.

The programme uses a digital platform with an interactive voice response system, allowing callers to ask questions, respond to the stories and share their experiences. Queries are later answered by text message. Of the 50,000 calls received in the first three months, 6,000 callers shared their responses and asked for more information.

At the village level, the intervention is implemented through youth clubs whose members are between 15 to 25 years old. A community leader, chosen from among the older youths in the village, acts as a mentor and counsellor for his peers, and as a mediator between adults and boys.

One group successfully stopped the early marriage of a boy among them by explaining to his parents and relatives about the destructive effects of child marriage, such as hampered educational and social growth, or the how girl brides are more likely to suffer from sexual violence.

Kishor Varta wa/s also introduced to the 30 co-educational secondary and higher secondary schools in Bundi, after a local partner, Manjari, an NGO focusing on social justice and equality, convinced the district education officer and the police in Rajasthan about the importance of equipping adolescents with life skills and knowledge about their rights and sexual and reproductive health. The programme is now part of the standard school curriculum, having been integrated as a monthly class.

During the sessions, a facilitator meets pupils, urging them to call the number and listen to the stories. They meet again a month later to discuss the issues and answer their questions.

A tool for mass awareness
“The changes did not come all of a sudden, but only after the children listened to the stories regularly for over two or three months,” says Adarsh, a facilitator from Nainwa village.

The project spread by word of mouth as boys discussed the issues they were learning with friends and relatives. Other adolescents living 100km away from the initial target villages started calling in, asking for more information, says Bajrang Singh, from Manjari. “It is a very effective tool for mass awareness,” he says.

When the number of calls shot up in March 2016, CHSJ was forced to halt the digital component, unable to bear the rising costs of maintaining it. Facilitators kept disseminating the stories as Bluetooth files.

In November 2016, the programme won the Vodafone Foundation “Mobile for Good Award” in the women’s empowerment and inclusive development category, one of six winners in a national-level competition with 300 entries, CHSJ received a grant of around $22,500, allowing them to continue the mobile platform in January, at least for another year.

With adults in the villages ill-equipped to talk about sexual and reproductive issues, the stories provide a crucial opening point into these topics.

“Despite being a science teacher, I did not know the information given in the Dada ka Gussa story,” said Sarafat Ali, a teacher at Jajavar village, referring to the sex education story that Sahil also learned from, in a documented interview with a CHSJ facilitator.

“The students in the school also discuss these stories with us now. It feels good that a change is coming in their thinking,” he said.

Considering the frankness with which otherwise taboo issues are discussed in the stories, the organisers felt it necessary to involve parents.

“It is important that they know what is going on. Most families were against the particular story discussing sex education because they thought it will badly impact their sons,” Singh says. “We wanted to send a clear message that we do not have any wrong intention,” he adds.

“The best change comes when you convince everyone, and get everyone on the same page. When things happen by force, there are going to be some consequences.”

Stopping child marriages
The stories have also directly affected adolescent girls. They have encouraged them to continue their education, allowed for more independence, delayed marriages and convinced their brothers take part in domestic chores.

One 16-year-old girl, Kriti, heard the story Haldi ki Jaldi – Hurry to Marry – about the consequences of child marriage and its illegality in the Indian constitution. Afterwards, she refused to get married because she wanted to continue her studies. Her future father-in-law and his brother visited her village to take her to their home, so she called the police and administrative officials. The police arrested the men, and, after questioning, released them on bail.

Local Hindi-language newspapers reported Kriti’s story – given its rarity in a state where child marriage is common – drawing attention to how she took the matter into her own hands.

Kriti now regularly attends school with the support of her parents.

Even so, there are challenges reaching other girls. The gender divide gap in technology use is wide. Across India, males are 25 percent more likely than their female counterparts to own a SIM card, according to a survey by GSMA, a global mobile association. Most girls and women in villages do not own a phone and if they can get access to one, their use is usually controlled by their brothers or fathers.

According to one testimony, from a collection of 50 compiled by CHSJ into a document titled “Impact Stories”, one pupil, after hearing the recordings, bought a phone for his sister, and encouraged her to listen to them.

Prateek, who is 16 years old, says his 15-year-old sister dropped out of school last year.

“The moment I heard the ‘Lakhanpur ka Raju’ story” – which addresses gender inequalities – “I insisted to my sister that she continue her studies,” he told Al Jazeera. “I also convinced my parents for the same and they said that they will get her enrolled in the school in the forthcoming sessions.”

According to another testimony collected by CHSJ, one boy started helping his mother and sister with chores around the house after listening to this story. Previously, he had assumed it was normal for them to do the household tasks, while he and his father were responsible for anything to be done outside the home, such as the shopping. Although he now helps his mother and sister, he does so in secret; he is scared of his father, and too ashamed to tell his friends.

True change is difficult, but possible
CHSJ recognises that progress will be slow.

“Changing the centuries-old social norms is difficult, but we also recognise that it is possible,” Uzzama says.

The issues that the stories address were themselves selected after a door-to-door baseline survey conducted in 2014 in 30 villages in Rajasthan.

The issues of dropping out from school, early and forced child-marriage and pregnancy, malnourishment among women, forced sex and dowry-related violence among young brides, as well as their secondary status in the household and workplace are just some of the problematic norms in Rajasthan.

Story modules were developed by incorporating feedback on draft content from adolescents and youth groups engaged in other CHSJ and Manjari projects. This feedback was crucial in shaping narratives that could address cultural practices and prejudices, identify the key issues and resonate with the youth.

CHSJ wants to expand the programme’s reach to neighbouring communities of Bundi as well as enlist more male peer leaders.

“We are trying to find ways of upscaling it, the major issue being cost. The pilot project has proved the success of this methodology and its potential for reaching directly enormous numbers of people. We are on the lookout for partners in Kishor Varta who are willing to bear the cost of the digital platform,” Jain says.

The cost of running the system – and the need for more facilitators – are only some of the challenges. The project also needs to be closely monitored and periodically evaluated.

“It is not like adding sugar to milk that you could see the impact right then,” says Singh, “Kishor Varta has started a process and reaction with the pilot project, results of which might be seen over next two to five years.

“Getting the boys ready to listen to the stories is the first important step – in which we have been successful.”

*All the children’s names have been changed to protect their identities.