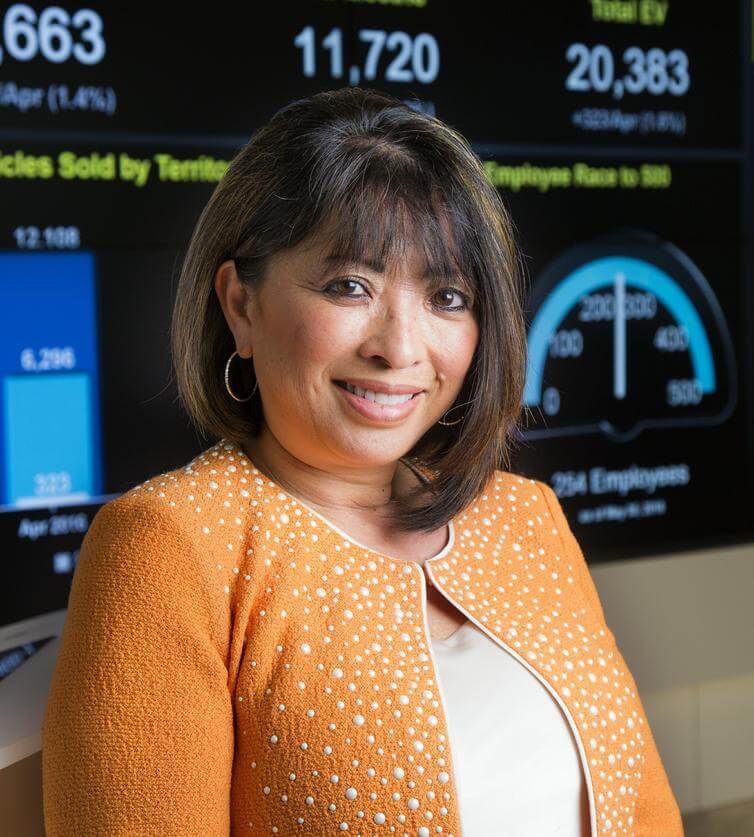 The San Diego Union-Tribune
May 21, 2016
By Kate Morrissey

If San Diego were to shrink the gender gap in its workforce even moderately, the metro area could increase its gross domestic product by about $23 billion by 2025, according to a new report from the McKinsey Global Institute.

That’s about a 9 percent boost to the current estimated growth, according to the study.

To reach that goal, San Diego would have to focus on growing the number of full-time, working women relative to men, especially in managerial and leadership positions and high-pay industries, according to the report.

To get women into the workforce — and at the necessary levels — San Diego would have to address social issues that keep women from working at their full potential, the report said.

“Given that the unemployment rate is at one of the lowest levels in a long time, if we’re not pushing on this growth lever, it’s going to be hard to find talent going forward,” said Kweilin Ellingrud, researcher on the report and a partner with McKinsey & Company, a global management consulting firm and parent organization for the Institute. “If we’re not using women in their full set of talents, I think it’s going to be hard to grow.”

Ellingrud said that while full gender parity is the ideal scenario, the report stopped short of that, instead focusing on a “best-in-class” scenario based on actual recent results for growth in female workforce participation in other U.S. states.

Researchers looked at how states performed over the past decade in three areas: ratio of women to men in the workforce, number of women working full time instead of part time and the number of women in higher-pay industries such as manufacturing versus lower-pay industries such as education. They then calculated how much each state would improve if it followed the rate of the fastest progressing state in each category.

California was not among the model states for rate of improvement. Texas, New York, North Carolina, Arkansas, Idaho, Oregon and Utah set the standard used for that in the study.

San Diego performed slightly better than California as a whole for most metrics in the report. The female-to-male ratio in the overall workforce in San Diego is 0.80 to California’s 0.79. Both trail Vermont, which leads the country at 0.93. At the city level, the one that comes closest to parity is Baltimore at 0.96.

Progress can’t be achieved, according to Ellingrud, without also addressing social issues considered in the study such as representation in elected office, teen pregnancy and violence against women.

According to the report, California and San Diego both struggle with the metrics for representation in elected office. The ratio of women to men in elected positions in California is 0.43. The state with the highest ratio, at 0.60, is Connecticut. While four of San Diego’s nine city council members are women, San Diego has only had two women as mayor, the most recent ending her term well over a decade ago, the report notes.

At the city level, the report measures violence against women in terms of rape. San Diego has a rate of 20.33 rapes per 100,000 women while Miami has the lowest rate at 3.70.

The San Diego data was provided to The San Diego Union-Tribune by the McKinsey Institute as a follow-up to its national study last month.

To achieve the level of parity in the workforce that the report aims for, California would have to create 640,000 additional jobs by 2025, according to Ellingrud. She said there are plenty of women to fill them. The report found that there are 2.37 million women in California between ages 25 and 59 able to work but who are not currently working. About 800,000 of those women have associate’s, bachelor’s or advanced degrees.

Ellingrud acknowledged that adding that many jobs beyond current projections will take work, but she said it’s possible if government, private companies and nonprofits collaborate.

Economists Lynn Reaser of Point Loma Nazarene University and Alan Gin of the University of San Diego both said California is capable of creating the extra jobs by 2025. According to the McKinsey Research Institute, it’s not just about generating more jobs for women, but about management and leadership positions, especially in high-pay industries.

“Across the United States, one of the most relatively equal countries around, we still have only two-thirds of the leadership positions that men have,” Ellingrud said. 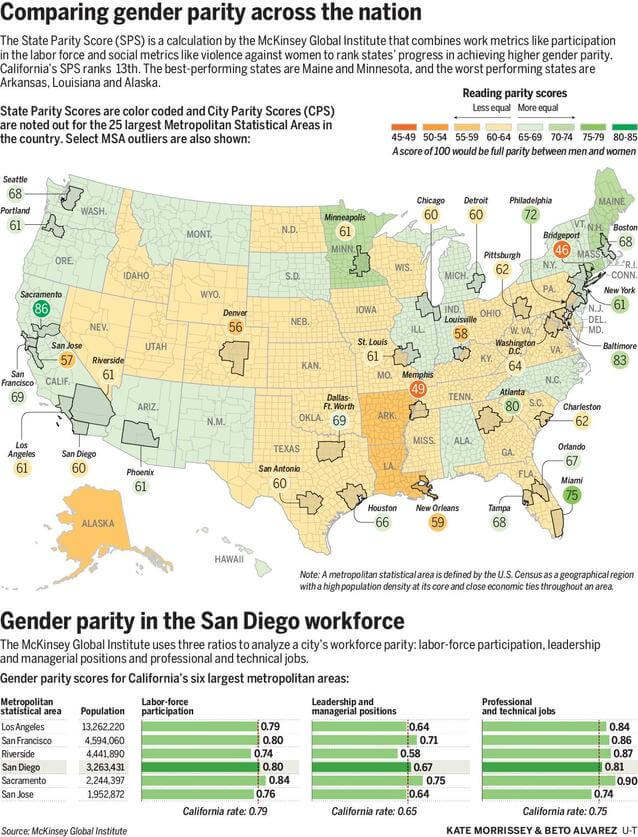 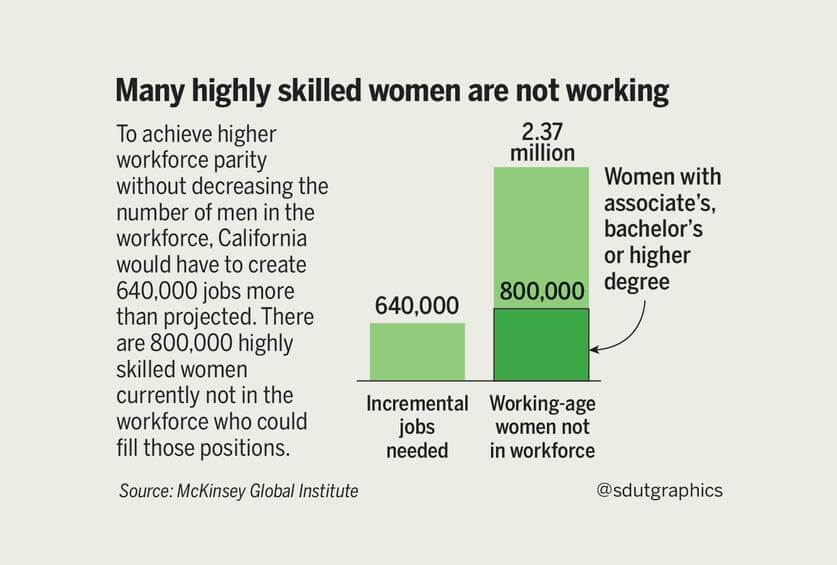 “There are very disturbing figures for funding for female founders,” Goodman said. “Unconscious bias is rampant when women go to ask for money to support their ideas.”

Goodman cited a 2014 study from Babson College that found 2.7 percent of venture capital-funded companies have a women as the CEO.

Caroline Winn, chief energy delivery officer for San Diego Gas & Electric, said the mentality is changing at companies like hers. SDG&E has education programs to help reassure middle school and high school girls that they can do STEM.

“Sometimes there’s peer pressure that girls should be in different types of careers, but I think there’s more programs that really encourage younger girls to be accepted into these types of programs,” Winn said.

She was optimistic that San Diego’s women would continue to gain ground in management and in STEM-related careers over the next decade.

One obstacle that the report said needs to be addressed in order for women to step into more management roles is the amount of unpaid work that women do.

Ellingrud said that women across the country do double the amount of unpaid work that men do, keeping many from working in paid positions to the extent that men work. While child care or elder care take up a portion of that work, Ellingrud said the majority of it is actually tasks like cooking, cleaning and shopping.

According to a 2014 study by the Kaiser Family Foundation, The New York Times and CBS News, almost three-quarters of women who identify as homemakers would consider going back to work if the job offered flexibility.

“When I was younger coming up through the ranks and having babies, I wished my husband could have had the same leave opportunities than I had,” she said. “I was making more money than he was, and it made more sense for him to stay home with the baby.”

Rachel Michelin, executive director of California Women Lead, an organization that works as a non-partisan support system for women running for office, agreed.

“I think women are tired,” Michelin said. “There are still a lot of traditional demands that are placed on women, and that does weigh heavy on women, especially when you move up the ladder.”

Michelin said the government is more likely to support those kinds of issues if women have more equal representation. She said that San Diego used to be a “trend setter” for having women in elected positions, but that’s changing.

“San Diego’s power in Sacramento from a female perspective has decreased a little,” Michelin said. “Locally there was always a really strong team of women leaders, and we’ve seen that decrease as well.”

Sherri Lightner, the San Diego City Council president and first woman in the position, said she’s worried the council will lose its gender balance in the upcoming election. Right now, four of the nine members are women, but two, including Lightner, are termed out.

“We’ve come a long ways and yet we haven’t,” Lightner said.

She remembered the time before equal opportunity employment laws and maternity leave and how much a difference they made in the working lives of women she knew.

An engineer herself, she also champions programs across San Diego designed to interest girls in STEM, but she said there’s still more that needs to be done. She wasn’t sure if San Diego can achieve the McKinsey report goals by 2025.

“Ten years is a very short time,” Lightner said. “That’s what I’ve become aware of working here at the city.”

The McKinsey report called out San Diego’s lack of female mayors as one of the main social issues to address. The last ended her term in 2000.

Lori Saldaña, who is running for mayor and served in the state assembly from 2004 to 2010, recalled the conversations she had with other women serving in the legislature about growing the number of women in elected positions.

“We would often joke how it’s difficult to get women to run for office because they feel their skill sets are somehow not the right match for serving as an elected official. Men are born thinking they’re ready to run for president,” she said. “You can have the most skilled, talented women with business experience and advanced degrees and wonderful resumes, but they don’t believe it’s a good match for elected office.”

Big cities across California also have few female mayors. Two — Oakland and Fresno — currently have women in the position, and Fresno’s will end her term with the upcoming election. No woman is running to replace her.